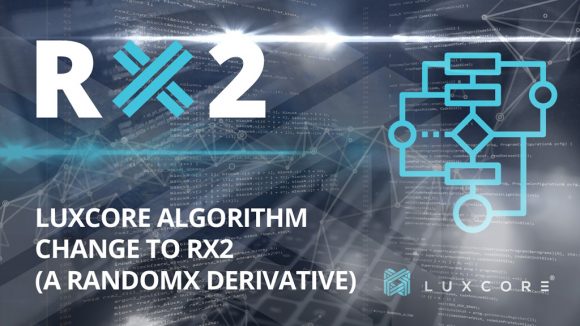 Luxcore (LUX) project also known as LUXCoin previously has announced their plans for an upcoming fork that will replace the currently used PHI2 algorithm to a new one called RX2 (essentially a variation of the lately popular RandomX algo). RX2 is Luxcore’s version of RandomX that has some small modifications to the RandomX parameters in order to suit some specific requirements (details are not yet revealed). The exact date for the introduction of the new algorithm has not been revealed yet, so it is sill “in the coming weeks”. This marks yet another crypto project that is going towards the RandomX algorithm in order to fight with FPGA and ASIC miners.

Since the RX2 algorithm is based on the RandomX it will also be more CPU-friendly for mining (will require a separate miner support apparently) as it will not work with any of the miners that currently support RandomX. It seems that so far the RandomX algo favors AMD’s latest multi-core Ryzen 3 CPUs in terms of performance over Intel’s products that are much more widely spread and used mostly by miners in the last years. This could help AMD’s sales of new processors if mining for RandomX picks up and offers decent profitability which is still not the case for the moment. If more projects move towards RandomX or variations of the algorithm, like LUX is apparently doing, the interest and prfoitability might as well skyrocket and spark a new wave of CPU mining oriented rigs to be built.