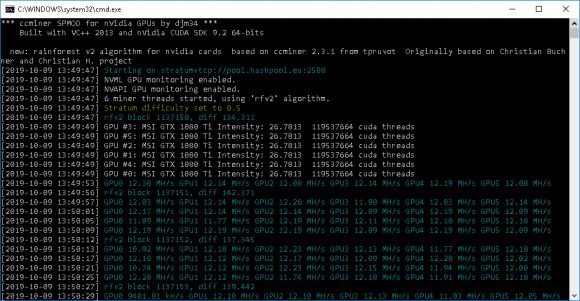 If you might be interested in MicroBitcoin’s (MBC) Rainforestv2 mining on Nvidia GPUs you might want to check out the latest optimized spmod ccminer fork that offers significantly faster performance than the publicly available official version from djm34 (rfv2 ccminer). A quick test shows that SP’s optimized miner (closed source binary available for Windows only) is about 4 times faster than the public open source version from djm34 on a GTX 1080 Ti GPU, so significant boost in performance is to be expected on other Nvidia GPUs as well.

The only drawback with MBC is that it is currently listed on just 2 small exchanges with very little volume, although with a hashrate a few times faster than before there could be some profit to be made at least initially, so you might want to check it out. It has a huge market capitalization as the project is not so new, but the trading volume is pretty low at the moment. The cmminer SPMOD for rfv2 is compiled with CUDA 9.2 and is a 64-bit only binary for Windows, so make sure you meet the requirements to run the miner software.

Update: And very soon after the release of the miner MicroBitcoin (MBC) has successfully forked to a new algorithm – yespowerr16… a CPU friendly one and not GPU mining oriented apparently, so the optimized miner was usable for just a couple of hours before the fork. MBC apparently needs to keep all their information channels more up to date about tings such as upcoming hard forks!